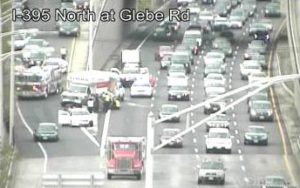 Update at 10:40 a.m. — The Shirlington ramp has reopened and only the far righthand lane of I-395 remains blocked before the ramp.

The ramp from Shirlington circle to northbound I-395 is blocked due to an accident.

A U-Haul truck and at least one other vehicle was involved in the accident along the northbound lanes of I-395. The vehicles ended up on the ramp, which is now completely blocked by emergency crews. One northbound lane is also blocked.

At least one injury has been reported as a result of the accident. Police are now directing the drivers stranded on the ramp to turn around and find an alternate route to the highway.