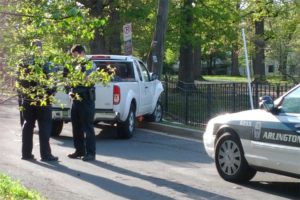 A pickup truck that was reported stolen crashed into a fence in front of Hayes Park on Wednesday evening.

The incident happened just before 5:45 p.m., when police received a call for a truck that had crashed into a fence and a utility pole on the 1500 block of N. Lincon Street. The crash happened in front of Hayes Park and across from Arlington Science Focus school, in the Virginia Square neighborhood. The driver of the truck ran off after the accident, police were told.

After a short investigation officers determined that the truck’s owner had parked it with the keys still inside, and had just noticed that it was missing, according to police radio traffic. Police dogs were called in to try to track the suspect, but as of this morning there was no report of an arrest in the case.