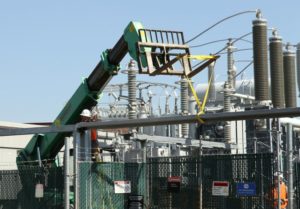 After years of waiting, it appears a wall is finally being built around the Dominion power substation (3245 Wilson Blvd) near Clarendon.

Workers have been spotted using heavy equipment to add beams along the perimeter.

Dominion had promised to upgrade the current fence with a more robust containment wall after replacing the substation in 2009. Residents had been worried not only about the aesthetics of what they consider an unsightly chain link fence, but also about safety due to the existing fence’s integrity, or perceived lack thereof.

Completion of the wall had originally been slated for spring of last year, but construction didn’t even start until a couple of weeks ago. So far, there’s no word on when the project will be completed.