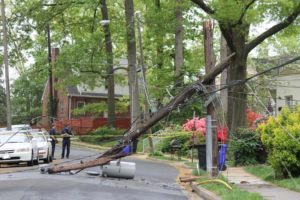 An accident on N. Taylor Street in Cherrydale has left power lines strewn across a quiet residential block. Police, firefighters and Dominion Power are all on the scene.

An officer at the scene said it appears a tall moving truck had become caught on low hanging wires over the street, but didn’t realize it and kept driving. The wires came down, along with a power pole which held a transformer.

There are currently wires in the street, across sidewalks and in people’s yards. The lines are no longer live, and crews are working to move them. Nobody was hurt in the incident

Seventy-six customers were without power for about an hour and a half. Right now, only 10 are still without power. Dominion Power spokeswoman Le-Ha Anderson said those without electricity are the ones closest to the downed transformer, and power should be restored somewhere between 4:00 p.m. and 6:00 p.m. Crews are bringing in a new power pole and transformer to be installed, hopefully also by 6:00 p.m.

Taylor Street remains closed between 15th and 16th Streets. Arlington County police will stay on the scene to direct traffic until the road re-opens.