(Updated at 1:45 p.m.) A man suffered injuries that are reported to be life-threatening after an on-the-job accident in the Old Glebe neighborhood.

Police and medics were dispatched to a large, under-construction home on the 4600 block of N. Dittmar Road around 1 p.m. Initial reports suggest a worker was carrying a ladder when it made contact with power lines, electrocuting him.

The man is being rushed to a local hospital by Arlington County Fire Department medics.

Police are now investigating the accident. A Dominion power crew is also being requested to the scene.

(Updated at 8:40 p.m.) An “electrical emergency” — reportedly a utility pole being burned by a malfunctioning power line — has prompted an extended road closure in Virginia Square.

“It was just called in and it is a very dangerous situation,” a firefighter could be heard telling a resident along N. Kirkwood Road around 4:30 p.m. “We don’t know how long it will be closed. It could take one hour or six, we don’t know.”

Dominion Energy crews are on scene to work on the line and the pole.

As of 8:30 p.m., 26 Dominion customers in the neighborhood were reported to still be without power.

Electrical Emergency – 3400 block of 14th St North (bet Lynbrook Dr and Kenmore St) will be blocked for Emergency Electrical line work. Power may be affected in the area. Please stay clear until crews are finished. pic.twitter.com/REcWX5AiMb 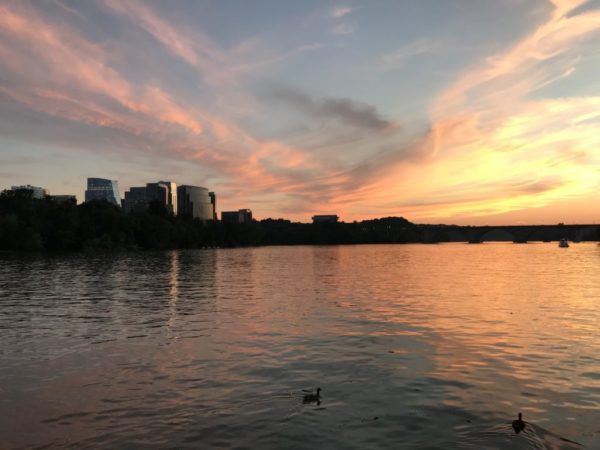 Police Searching for I-66 Wrong-Way Driver — Police are still looking for the driver who crashed into another vehicle while driving the wrong way on I-66 near Rosslyn early Sunday morning, after being chased by a uniformed Secret Service officer who spotted the car driving the wrong way in D.C. [Fox 5, WTOP, Twitter]

Vehicle Crashes into House in Barcroft — A vehicle that was driven into the side of a house in the Barcroft neighborhood Sunday morning caused only minor damage to the building, according to the fire department. [Twitter]

Truck Brings Down Power Lines in Long Branch Creek — “Downed power lines caused around 1,000 customers to lose power in Arlington County on Saturday. Dominion Power said a truck ‘snagged’ the lines and broke two of the power poles around 8:15 a.m. It also damaged some vehicles in the area.” [WJLA]

Runner Struck By Car Hopes to Run Marathon — A local runner who was struck by a car while running recently hopes to run the Marine Corps Marathon in the fall despite suffering two broken bones in her foot. [Twitter]

Arlington Teens Arrested in Ocean City — Three teens from Arlington were arrested in Ocean City, Maryland after they pulled over to ask police officers about parking in the area and the officers “immediately recognized the strong odor of marijuana emanating from the vehicle.” They searched the car and found “roughly a half a pound of marijuana along with prescription drugs, methamphetamine, brass knuckles, an assisted opening knife and several items of drug paraphernalia,” plus “a full face mask in the vehicle [and] a .25 caliber handgun.” [The Dispatch]

Dems Still Distributing Print Newsletter — Print may be waning as a medium, but the Arlington County Democratic Committee is still going all-in on its printed campaign newsletter, “The Messenger.” The party is recruiting more than 400 volunteers to distribute the newsletter to homes throughout the county. [InsideNova] 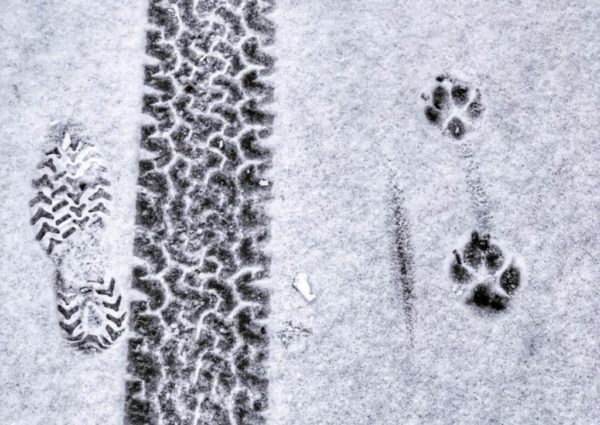 Garbage Truck Crash — Among a number of other potentially weather-related crashes this morning, a garbage truck ran into a utility pole on the 4600 block of 27th Street N., near Marymount University. Dominion crews responded to the scene for a report of downed power lines. No injuries were reported.

Four Mile Run Valley Meeting Cancelled — A meeting of the Four Mile Run Valley Working Group, scheduled for tonight, has been cancelled. The cancellation is due to county staff reviewing “key pieces of the 4MRV transportation analysis,” the county wrote. “Staff will provide an update on the process schedule and timeline at the next scheduled meeting on Tuesday, Feb. 6.” [Arlington County]

Lee Highway Planning Moving Forward — “Funded with two county grants, donations and sponsorships, the Lee Highway Alliance is now back on the front burner of Arlington’s planning agenda, said county board Chairman Katie Cristol, who promised forward movement in the next couple of months.” Meanwhile, businesses along Lee Highway are generally supportive of redevelopment, according to the alliance. [Falls Church News-Press]

Power is out in parts of Seven Corners after a truck brought down power lines behind the Eden Center in Falls Church.

The incident happened around 2:30 p.m. in the rear of the shopping center. Two utility poles were snapped in half as a result of the collision.

At one point, nearly 2,500 Dominion customers were without power in the area, including in parts of Arlington County. As of 3:30 p.m. Dominion was no longer reporting any outages in Arlington.

The Arlington County Fire Department responded to the scene for sparking power lines and a spill of mineral oil from the transformers. ACFD has since turned over the scene to Dominion, which will be cleaning up the spill, according to scanner traffic.

Some traffic signals in Seven Corners may be affected by the outages, according to Fairfax County Police.

Update at 2:15 p.m. — Electricity has been shut off to the fallen power lines and firefighters are now working to extinguish the brush fire.

Earlier: A tree has fallen on power lines and sparked a growing brush fire along Four Mile Run Drive.

The incident was first reported by a passerby just after 1 p.m.

Initial reports suggest a large tree fell across the Four Mile Run Drive access road, striking a power line. That sparked a brush fire in the dry grass below, which as of 1:20 p.m. continues to burn.

The fire department cannot extinguish the wildfire around the power line until Dominion Power crews arrive and shut off the power, according to scanner traffic. As of 1:40 p.m. the flames were nearing vehicles parked along the access road.

Residents should expect “a lot of smoke in the area,” according to a police officer on scene. Police have shut down traffic in both directions on the access road near S. Wakefield Street and are preparing to shut down the mainline Four Mile Run Drive.

Nearly 900 Dominion customers are still without power in Arlington as of 5 p.m. Monday, with numerous small outages scattered across the county.

That’s down from more than 6,500 outages last night, after an initial line of 60+ mile per hour wind gusts swept through the area. The strong winds continued through this afternoon but have since died down.

Dominion’s power outage map shows the two biggest power outages are in the Highgate/Colonial Terrace community in the Rosslyn area, and along 26th Street N./31st Street N., near Marymount University, where photos (above and via Twitter) show at least one tree down in the roadway and a power pole snapped in half.

Dominion is estimating that power will be restored by 11 p.m. and 8 p.m., respectively, for each outage.

In all, around 3,000 Dominion customers are still in the dark around Northern Virginia. 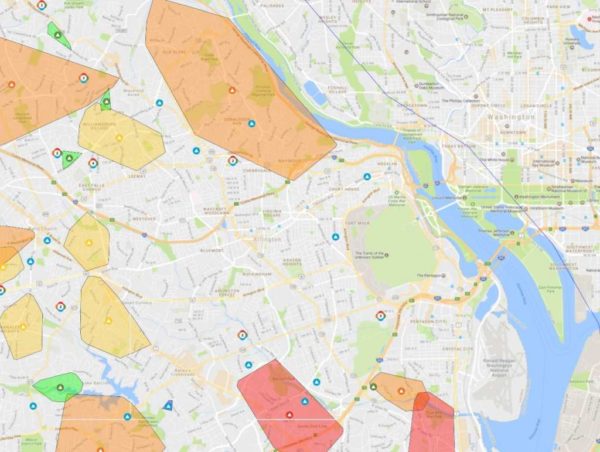 Update at 8 a.m. — Thousands of Arlington residents are waking up to no electricity this morning. The number of outages in Arlington is only down to around 4,900. Marymount University is still without power and portions of the Rosslyn/Courthouse area, including traffic signals at some busy intersection, are dark.

(Updated at 12:15 a.m.) More than 6,500 Dominion customers are without power in Arlington tonight after a squall line packing 60+ mile per hour wind gusts swept through the region.

Numerous trees, power lines and utility poles are said to be down across parts of Arlington, primarily in north Arlington. Several transformer fires have also been reported.

In some cases, trees are leaning against live lines and catching on fire. In other cases, power lines and poles are down across roadways, blocking lanes. Glebe Road, Military Road and Williamsburg Blvd are among the roads reported to blocked.

On Williamsburg Blvd, a fire department vehicle was damaged, possibly by falling branches or debris.

A large portion of Arlington north of Lee Highway — from Cherrydale up to McLean, including the Marymount University campus — is in the dark, according to a Dominion outage map.

There are also portions of Shirlington, Fairlington and other areas of south Arlington without power, according to the map.

In all, more than 34,000 Dominion customers throughout Northern Virginia are without power, including more than 7,000 in Alexandria. High winds are expected to continue throughout the day on Monday.

@ARLnowDOTcom Electrical fire on south Quinn and Columbia pike along with a big tree in the middle of the street pic.twitter.com/MRFFO46iC2

Caution on roads #GarbageCans and rubbish on the streets. @ARLnowDOTcom

END_OF_DOCUMENT_TOKEN_TO_BE_REPLACED

A FedEx tractor trailer pulled down some low-hanging power lines in the Ballston area Thursday evening, trapping the driver in the cab of the truck.

The accident happened just before 3:30 p.m., near the intersection of 13th Street N. and N. Stuart Street.

The top of the truck clipped some power lines as it was driving down the street, pulling them down and draping them across the semi-trailer. The lines were reported to be sparking on the road immediately afterward.

Though the driver was not physically trapped, he remained in the cab of the truck for fear of electrocution.

Arlington County police and firefighters responded to the scene, closing down roads and sidewalks while they waited for Dominion to shut off the power.

The driver was still in the cab when an ARLnow photographer left the scene, around 4 p.m.

Dominion reports that seven customers in the neighborhood are without power. Their electricity is expected to be restored between 7-11 p.m., according to Dominion’s website.

A road is closed in the Arlington Ridge neighborhood due to a downed tree and power lines.

The large tree fell this afternoon during calm weather, taking power and utility lines down with it. Thirty-five Dominion customers are without power in the area, according to the power company.

A Dominion repair crew is on scene, but the intersection of S. Joyce Street and 28th Street S., near Glebe Road, is closed. The tree and numerous wires are down in the intersection.

(Updated at 2:40 p.m.) A construction vehicle is currently draped with downed power lines near Virginia Square.

The incident occurred shortly before noon at 3700 6th Road N. as the truck was being hauled through the Ashton Heights neighborhood.

Firefighters and police were called to the scene and currently have the sidewalk and the road closed for safety, as the lines were believed to be live electrical lines.

No injures were reported, but at least one neighboring home was reportedly damaged.