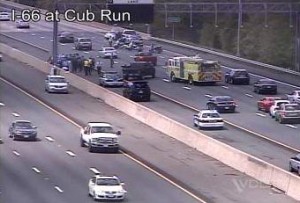 (Updated at 3:20 p.m.) An Arlington County Police cruiser was stolen during a stop on I-66 today, leading to a police chase.

The incident started around noon when an officer in a marked ACPD cruiser stopped to assist Virginia State Police who had stopped a pedestrian on I-66 in Prince William County. A struggle ensued, the suspect struck the Arlington officer in the face and then hopped into the officer’s cruiser and sped off

From the Virginia State Police press release on the incident:

At 11:58 a.m., Virginia State Police Trooper C.T. Grzelak responded to a male pedestrian on Interstate 66 in the eastbound lanes at the 46 mile marker in Prince William County. As the trooper stopped out with the man, an Arlington County Police Officer pulled up to assist. Upon being approached by law enforcement, the male subject became combative and began banging on the trooper’s patrol car. As the trooper and officer tried to take the subject into custody, the pedestrian struck the Arlington officer in the face and then fled the scene in the officer’s patrol car.

The trooper then pursued the fleeing suspect. The pursuit continued off I-66 and onto Route 29 before returning to I-66 headed westbound. At the 47 mile marker in Fairfax County, State Police and Prince William County Police were able to encircle and contain the suspect vehicle and force it onto the shoulder where it finally came to a stop.

The suspect then ran from the stolen vehicle and jumped into the bed of a pickup truck that was stopped in the westbound lanes of I-66 (westbound traffic had stopped as the pursuit was brought to a conclusion). The male subject grabbed a shovel and started swinging it at the troopers as they approached him. He finally complied with the troopers’ verbal commands to drop the shovel, but then jumped out of the back of the pickup truck and climbed over the cement Jersey wall.

The Arlington County Police Officer was transported to a nearby hospital for treatment of non-life threatening injuries.