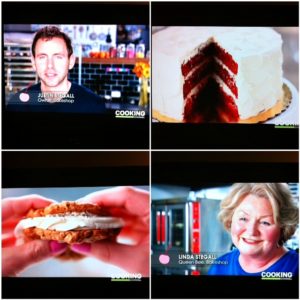 (Updated at 3:30 p.m.) Bakeshop (1025 N. Fillmore Street) was featured on the Cooking Channel “Unique Sweets” this past Sunday.

The Clarendon confection store’s owner, Justin Stegall, and his mother Linda were both featured on the program, as well as Bakeshop’s oatmeal creme pie, 7-Up cupcakes, and red velvet cake. The episode was focused on nostalgic “childhood treats.”

Unique Sweets bills itself as “an insider’s peek into innovative eateries across America that are creating the most unique and exciting desserts today.” The show airs on the Cooking Channel at 10:30 p.m. on Sundays, though repeats are aired multiples times during the week.

Stegall says he got a call from the producers of the show out of the blue, asking if he wanted to be featured. A camera crew spent seven hours in the store a couple of months ago, Stegall said, and the finished, edited segment was about seven minutes.

Stegall says he was surprised by how many people have told him that they saw him on television.

“It’s kind of funny, I didn’t know cooking TV was as big as it was,” he said. “The craziest thing is that my friends… are calling up and telling me they saw me on TV, and I didn’t tell them it was going to be on.”