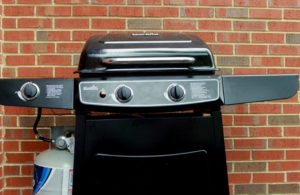 It’s National Barbecue Month, and as the weather warms up, more people are firing up the grills. But before getting caught up in grilling, it might be a good idea to make sure you’re familiar with the Arlington County fire code.

According to Arlington County Fire Department spokesman Captain Gregg Karl, problems can arise with people in multi-unit residences, such as condos and high rise apartments, who may not even realize they’re violating the code.

No grills, combustible devices or open flame cooking devices are to be used or stored on balconies and rooftops. Fire pits and similar types of warming devices are also banned. Electric devices without an open flame are acceptable.

Most standalone homes and townhouses with ground level patios are exempted from the rules. However, the fire department still recommends trying to keep the device 15 feet away from the building, or as far as space allows.

“You do still have the potential for a fire if something goes wrong with the grill,” Karl said. “We want people to be aware of where they’re putting the grill and the potential dangers.”

Landlords are supposed to inform tenants, in writing, of all the fire code regulations upon move-in and lease renewal. After that, tenants are responsible for following the regulations.

Those who are found to be in violation of the code will be issued a notice and given the opportunity to remove the offending items. Failure to correct the violation could result in a citation and fine.

Karl encourages people with questions about the rules to call the Arlington County Fire Prevention Office at 703-228-4644.