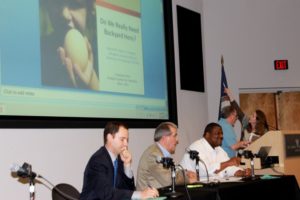 Jim Pebley, a member from the Waycroft-Woodlawn Civic Association, had proposed the resolution, which opposes changing the county ordinance in order to allow residents to raise chickens.

Currently, livestock or poultry must be kept at least 100 feet away from a property owner’s street and lot lines, which is a difficult feat considering the size of lots in Arlington. A group called the Arlington Egg Project has proposed eliminating that restriction so that residents can raise egg-laying hens in their backyards. The county’s recently-formed Urban Agriculture Task Force is tackling the issue and is expected to make recommendations to the County Board by early next year.

Pebley gave a presentation explaining why it would be detrimental to the community to allow backyard chickens. In addition to irking neighbors with noise, Pebley contends chickens in backyards would attract rodents, pose a health risk and pollute groundwater that drains to the Chesapeake. He said the chickens and their waste also produce odors, which would bother neighbors.

“The smell is unavoidable,” said Pebley. “This just really borders on nonsense.”

He also said it would be difficult for the county to enforce regulations for raising chickens, due to the animals being hidden in backyards. That, he believes, would push neighbors to report each other to authorities.

Fendley doesn’t believe the proper avenues have been followed to get information about urban agriculture out to the public. He asked the Civic Federation members to keep an open mind and to let the facts get out as part of the proper process.

“The Arlington Egg Project wants to foster a community conversation about backyard hens,” said Fendley. “All we’re asking you to do tonight is reserve judgment, we’re not asking you to join us.”

Fendley said the group is gaining support and more than 1,000 people have signed a petition requesting that Arlington allow backyard hens.

In addition to disagreeing with the way the backyard hen issue is being addressed, Fendley contends the Civic Federation’s resolution is unbalanced and biased as currently written.

“Let’s believe in Arlington, and let’s let the process work,” Fendley said. “If you believe in that process and if you believe in facts, then I ask that you join me in voting against this premature resolution.”

As it turns out, there wouldn’t be a vote on approving the resolution due to member concerns.

At issue is the final paragraph, which reads:

THEREFORE BE IT RESOLVED THAT THE Arlington County Civic Federation is opposed to relaxing the current restrictions in the Arlington County ordinances that relate to agriculture activities in Arlington, including the raising, housing, or sale of livestock or poultry, without a more expansive and inclusive public process.

Several members questioned the wording and expressed confusion over the intent of the resolution and exactly what issue it’s addressing. It was suggested that clarification should be made over whether the resolution is intended to oppose backyard chickens, or to offer a more inclusive public process. When members started proposing changing the resolution or tabling it until the next meeting, even more confusion arose.

Significant time was devoted to parliamentary procedure and ensuring all speakers properly introduced motions. When a motion to table the issue was brought up, additional time was spent scrutinizing the procedure for such a motion. As the meeting grew longer and more members left, a motion to adjourn was proposed, ruffling even more feathers.

In the end, members voted in favor of tabling the issue until next month’s meeting, in order to gather more information about the issue and how to re-word the resolution.