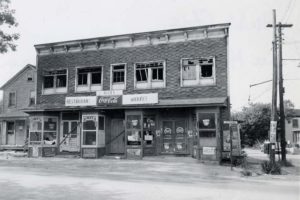 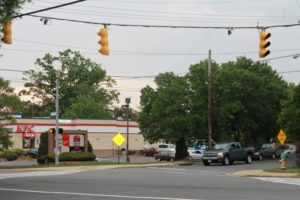 The photo on the left is of the Hicks Store on Lee Highway at N. Culpeper Street, taken in 1960. The store was in an area known as Hall’s Hill — now often called High View Park — which became a predominantly black community when freed slaves settled there shortly after the Civil War. Many family run stores owned by black residents opened in the area during the early 1900s. Hicks store was one of several businesses owned by the Hicks family.

Near the store, the Hicks cemetery is where family members were buried, until the land was condemned in 1959, to accommodate for the widening of Lee Highway west of Glebe Road. The remains were moved to a cemetery in Herndon.

The photo on the right is how the corner of Lee Highway at N. Culpeper Street looks today. A Kentucky Fried Chicken restaurant now sits on the site.