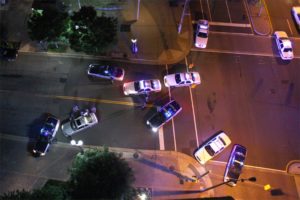 A police chase ended in front of the Virginia Square Metro station early this morning.

Virginia State Police were pursuing a vehicle on eastbound I-66 around 1:15 a.m. when it  exited onto Glebe Road in Arlington. The fleeing driver was then involved in a collision with another vehicle near the intersection of Glebe Road and Fairfax Drive, according to scanner traffic.

The chase ended when the driver apparently tried to bail out near the intersection of Fairfax Drive and N. Monroe Street, in front of the Virginia Square Metro station. Police apprehended the man in front of the station’s elevator entrance, according to a witness. Arlington County police were not involved in the chase, ACPD spokesman Dustin Sternbeck said, but did arrive on the scene after the driver bailed out.

No injuries were reported as a result of the crash at Glebe and Fairfax. So far there’s no word on charges against the driver, nor what prompted him to flee.