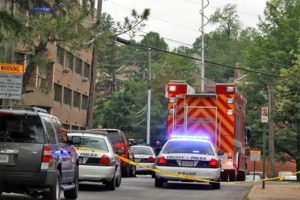 Update at 5:20 p.m. — The building has been cleared by the bomb squad. George Mason Drive has reopened.

Earlier: The Drewry Mental Health and Substance Abuse Center at 1725 N. George Mason Drive has been evacuated due to a bomb threat.

The bomb threat was phoned in by an adult female caller around 12:30 this afternoon, according to Arlington County Police Department spokesman Dustin Sternbeck. A total of five bomb-sniffing dogs — two from Arlington and three Alexandria — were brought in to sweep the building for any possible explosives. Two of the dogs got a “hit” on a spot within the center, according to scanner traffic, prompting the evacuation.

Arlington bomb squad units are currently on the scene investigating.

Police have shut down George Mason Drive in both directions between 16th Street and 20th Street. Buses are being rerouted as a result.

In addition to clients and staff of the Drewry Center, children have been evacuated from the NVFS Head Start Child Development Center on the premises. The Drewry Center is adjacent to Virginia Hospital Center, but the hospital is still open for normal business, according to Arlington County. 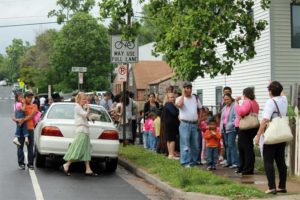 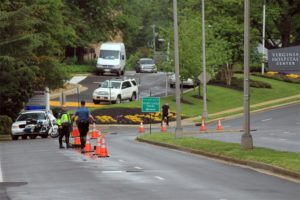