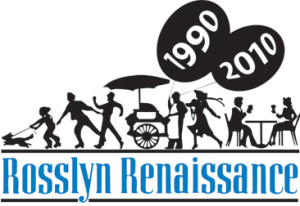 Two organizations designed to improve Rosslyn have decided to merge.

After 21 years in business, Rosslyn Renaissance (RR) will cease to exist and its urban design work will be taken over by the Rosslyn Business Improvement District (BID).

RR was created by the Arlington County Board in 1991, and lists its mission as “to work with residential, commercial, cultural, and government communities to realize Rosslyn’s potential as a distinctive urban environment through a focus on urban design and development.”

“Rosslyn Renaissance has helped to lay the foundation for Rosslyn’s future growth,” said Board President Jeffrey L. Kovach in a press release. “The BID will build upon and continue RR’s work, planning for Rosslyn today and in the future.”

RR’s work has helped with accomplishments such as securing a donated space for Artisphere, adding 98 additional affordable housing units and installing a pedestrian esplanade to Key Bridge.

“RR board members were the drivers to create the BID in 2003, and that is among the greatest of RR’s accomplishments,” said BID Executive Director Cecilia Cassidy. “The new organizational structure will bring us full circle. It is a graduation of sorts for the two groups – to Rosslyn’s benefit.”

The BID board has created an Urban Design Committee, which will incorporate all members of the Rosslyn Renaissance committee.

The two organizations will host a tribute event tonight in the main ballroom of the Key Bridge Marriott. The event is scheduled to include remarks from Rep. Jim Moran, Del. Patrick Hope and County Board Chair Mary Hynes. Board members and founders of Rosslyn Renaissance will also be recognized during the tribute.