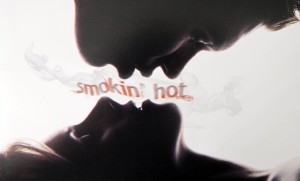 A pastor of a local Arlington church says married couples in the area are too stressed and not having enough sex.

Though the marketing is unquestionably provocative, the overarching goal of the sermon series is improving relationships. Syle says that all too often, intimacy is lacking from marriages and mutual understanding is missing from relationships.

Slye says stress is often the culprit when there’s not enough sex in a marriage. He said there’s even a term for it: DINS, or “Dual Income, No Sex.”

“We see this in Washington, D.C.,” Slye said. “I mean, there’s so much stress here, we have so many Type A people, and we’re just hard chargers. And sex, even among married couples, is just dropping dramatically because of all the stress.” 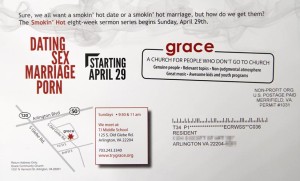 Syle says physical intimacy — kissing and sex — is a key component of marriages, and shouldn’t be pushed to the wayside.

“In a marriage, sex is meant to be a really positive thing,” he said. “It’s meant to be the glue that holds the husband and wife together. It’s powerful, and that’s what the Bible speaks about.”

“A lot of times when couples first get married, the sex between them is really bonding, but after a while… it either goes away or dries up,” Slye added. “Eventually, married couples — a lot of them — they’re having sex but they’re not kissing. And eventually they’re not even having sex. And you’ve got to do these certain things to instill the passion.”

Another disconnect in marriages and relationships comes from a lack of mutual understanding, says Slye.

“Arlington is one of the smartest areas in the country,” he continued. “But we have to be great students, we have to study this person that we’re in a relationship with harder than we study for our PhD, or Masters, or whatever… Both [partners] need to bring something to the table, and they both need to understand each other.”

Slye’s sermon series is based on the Old Testament’s Song of Solomon, which he describes as “the relationship book of the Bible.”

“We call it ‘Smokin’ Hot’ because there’s a lot of smokin’ hot stuff that happens in the Song of Solomon,” he said, adding that the verses contain lessons for couples and singles alike. “It really strikes a huge relevancy factor for people.”

For those who are dating, Slye said sex should “unfold on a proper timetable.”

Though Slye admitted that the “Smokin’ Hot” mailing was a bit atypical for a church, he pointed out that it’s somewhat fitting for Grace, which bills itself as “a church for people who don’t go to church.”

The church, which meets Sundays at 9:30 and 11:00 a.m. at Thomas Jefferson Middle School (125 S. Old Glebe Road), is non-denominational and takes pride in its “informal” services, which eschew formal liturgies and preaching for bands and sermons that are “a little more conversational in style.”

Syle says the church has no formal membership, but notes that the crowd on Sundays is about 50 percent married and 50 percent single, with an average age around 30. There is no dress code and congregants often show up in jeans, shorts or flip flops, Slye said.

The mailing seems to have helped bring more people to the church.

“From the mailing alone… we got at least 100 people” to show up at the first ‘Smokin’ Hot’ service, Syle said. “We’ve actually gotten pretty good responses from people.”