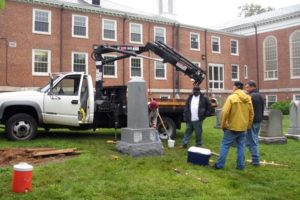 Hynes will be the featured speaker when the monument is dedicated at the historic Mount Olivet United Methodist Church cemetery (1500 N. Glebe Road) at noon on Sunday, May 27.

The dedication is taking place as the state and the county continue to mark the 150th anniversary of the Civil War. The 150+ year old church, it turns out, played an important role in the aftermath of the war’s first major land battle.

“The church was used as a field hospital during the summer by Federal troops retreating from the First Battle of Bull Run, July 21-24, 1861,” church officials noted in an email. “Several who gave their lives in the Civil War found their final resting places in unmarked graves in the cemetery. The new monument now marks their presence and honors their service.”

In addition to the Civil War graves, Mount Olivet also has a connection to the Memorial Day holiday itself. The church contains the grave of Sue Landon Vaughan, one of the early founders of Memorial Day.