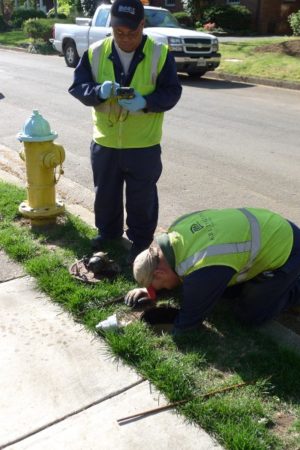 You may not have even realized it, but your water meter will get a makeover soon, if it hasn’t already. The county is about half finished with its efforts to install new automated meter reading (AMR) systems on residential buildings.

The new meters allow employees to easily gather water use information without physically having to access meter boxes. They are equipped with a radio transmitter than sends each meter reading to an employee who slowly drives through the neighborhoods.

“The meters tend to lose accuracy as they age, so one of the benefits is the increased accuracy of the reading,” said county engineer Mary Strawn.

AMR will reduce errors now that employees will not have to manually enter meter numbers. It’s also viewed as a safety measure, considering workers won’t have to scramble in some places with hard to reach meters.

Residents can expect to see fewer “estimated reads” on their bills, due to the efficiency of the new meters. Previously, if county workers were unable to find a meter due to factors like snow accumulation, they would estimate a customer’s monthly water use.

The county began installing AMR equipment on commercial and multi-family residences in 2007. Now, the project has moved on to the 30,000 single family residences. Workers are about halfway through that task, and hope to finish by early 2013.

Notifications are being sent out to residents before work on their meters begins. Installation only takes about five minutes, so most people probably won’t even notice that work has been done.

Sometimes, after the meter has been upgraded, residents may temporarily notice a burst of air or rust colored water. This is not harmful, and briefly running the cold water should clear this up.