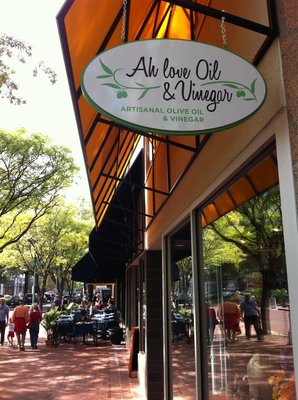 To celebrate its one year anniversary in Shirlington, Ah Love Oil & Vinegar (4017B Campbell Avenue) is having a celebration this coming Saturday, June 9.

Owner Cary Kelly said the store’s short time in existence has gone well, and customer response has been overwhelming.

“The last year has been, in a word, unbelievable,” Kelly said.

She said there were skeptics who didn’t think the store would work out, both because of the slow economy and because the store was selling such unique, specific products. Kelly credits a couple of factors with the store’s success.

First, the location. Residents and workers in Shirlington have been welcoming and continue to patronize the store, she says. Secondly, Kelly thinks the product quality has won over doubters.

“I think what changes people from being skeptical to hopefully delighted is that they get to taste everything,” Kelly said. “You really taste a difference. Then people are like, ‘Okay I get it now.'”

Kelly got the idea for the store when she visited a similar business in North Carolina. Cooking, particularly Mediterranean foods, is her favorite hobby, so the idea of an oil and vinegar business seemed to make sense.

While unique at the time, the flavored oil trend is quickly spreading. Kelly said that when Ah Love opened a year ago, it was the only store of its kind in the area. Now, she can list five in the metro region.

During Saturday’s event, the shop will officially launch a new olive oil-based skin care line. Kelly said she has sensitive skin and couldn’t find olive oil skin products she liked, so she decided to have some made. The Ah Love All Over line will be made with California extra virgin olive oil.

“I think olive oil is one of nature’s greatest miracles,” said Kelly. “There’s nothing it doesn’t do for us as far as health, both inside and outside.” 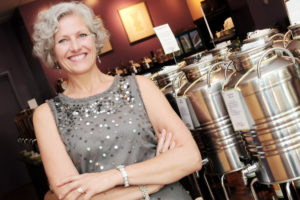 Kelly said the business has been more successful than she could have anticipated, and the anniversary party is to thank customers for their support.

“My husband and I feel so grateful how we’ve been supported by this community,” Kelly said. “That’s the real reason for this party.”

The event on Saturday runs from noon to 9:30 p.m. All day, there will be tastings of food made with the oils and vinegars, and a cooking demonstration at 4:00 p.m. From noon until 4:00 p.m., there will also be a jewelry display. Customers will receive 15 percent off the store’s products, and there will be giveaways throughout the day.