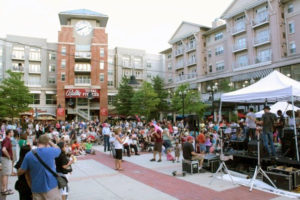 Pentagon Row (1101 S. Joyce Street) is getting ready to rock out. Tomorrow, June 7, kicks off the beginning of its summer concert series.

Thursday evenings from 7:00-9:00 p.m., patrons in the plaza can take in the sounds from one of the bands performing at “Rock at the Row.”

Bands are scheduled for every Thursday evening through August 30. Although the series touts “rock,” there are also bands catering to those who prefer other sounds, like reggae, funk and zydeco.

Tomorrow, the Bon Jovi tribute band “Slippery When Wet” will play. Next week it’s Beach Bumz, a Jimmy Buffett tribute band. The full schedule is below.