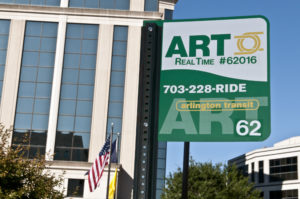 The county’s Transit Bureau has launched a program to engage residents in the upkeep of Arlington bus stops. Now you can take part in “Adopt-a-Stop”.

Individual residents or groups can sign up to adopt and perform light maintenance at one of the ART bus stops. At first, the program will focus on stops along the ART 51, 52, 53 and 61 routes. Additional routes and stops will be added soon.

Participants enter into a one year agreement, during which time they will maintain the stop at least once a week. They’ll perform duties such as picking up trash, reporting vandalism or safety hazards, clearing the area of snow and reporting items left at the stop.

The county will perform necessary heavier maintenance once it’s requested by the participant. Those tasks include removing graffiti, cutting tall grass and repairing bus stops. Should the participant request it, the county will also install a trash receptacle at the bus stop.

Transit Bureau Chief Stephen Del Giudice said although Arlington fared well in the recent recession, there was a reduction in the ability to commit resources to these types of maintenance projects. The county’s efforts mainly have focused on heavily used commercial corridors.

“We’re not always able to get to some of the residential areas. We see this as filling a need as far as our ability to commit resources to residential areas,” said Del Giudice. “We thought it would be a good idea to get community involvement in our transit program.”

Since the program began on May 16, three individuals each adopted a stop, and one group adopted two stops. Those who take part will get a certificate of participation, a mention on Arlington Transit’s website and a sign of recognition at the designated stop.