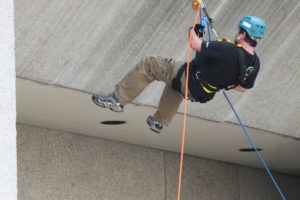 Celebrities like DC 101 morning show DJ Elliot Segal, of “Elliot in the Morning” fame showed up at the Hilton Crystal City (2399 Jefferson Davis Highway) to dangle from the side of the building.

It’s all part of Special Olympics Virginia’s “Over the Edge” fundraiser. Today, local celebrities including ABC 7’s Steve Chenevey and Arlington Connection’s Deb Cobb joined Elliot in taking part in the event. They each did a test run from only one story up, then moved on to the big event — a 15 story rappel.

Tomorrow, Friday, the fundraiser is open to the public. Participants are asked to donate $1,000 for the chance to rappel down the side of the hotel. Many groups pooled together money and signed up co-workers for the daredevil stunt.

The event tomorrow runs from 8:00 a.m. to 5:00 p.m. Sixty people are signed up to rappel down the hotel, but there are still spots available for people who want to sign up on site. Participants have one month to come up with the $1,000 donation.