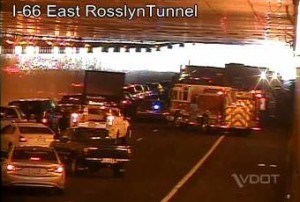 An accident in the Rosslyn tunnel on eastbound I-66 is snarling traffic.

Police have re-opened eastbound I-66, after having shut it down at Spout Run for a while. Traffic is crawling past the accident via the left shoulder.

Initial reports suggest there are injuries, but so far there’s no word on how many people are involved or how severe the injuries.

Drivers are advised to avoid eastbound I-66 until the scene clears, which may take a while. There are also reports of traffic backups along Spout Run and Lee Highway, where traffic had been diverted earlier.