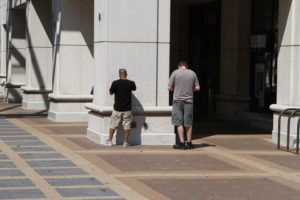 “It will take several days for life to get back to normal,” she said. “We urge people to stay out of the heat, stay hydrated, drive safely and check on their neighbors.”

Update at 4:55 p.m. — Long lines have been reported at local gas stations, with at least two stations even reportedly running out of gas. Many local grocery stores have also sold out of ice. The Pentagon City food court was very crowded as of 2:00 this afternoon, with many using it as a refuge. 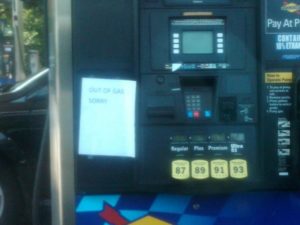 Update at 4:35 p.m. — Arlington County is urging residents to check on neighbors, especially “those who are elderly or who have limited mobility.” If their homes are hot due to a lack of air conditioning, the county recommends taking them to a local cooling center (see list, below).

Also, the county is advising those without phone service to go to a local fire station if unable to dial 911.

Earlier: The powerful storm that ripped through the region last night has left about 60 percent of Arlington County without power, according to authorities.

Winds of up to 70 miles per hour caused widespread damage across Arlington last night. Trees and large branches fell across roads and highways, utility lines were knocked down, newspaper boxes and other debris was blown into streets, and some roofs were damaged. Facing hundreds of calls, police and firefighters were often limited to simply placing cones, police tape and flares around downed trees in the roadway. In one instance, however, a half dozen residents helped two police officers remove a tree from the southbound lanes of George Mason Drive near Pershing Drive. 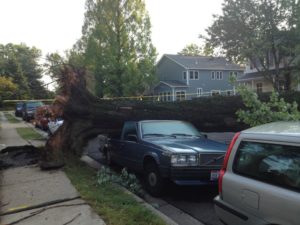 As of 4:30 p.m., Dominion was reporting 51,101 customers without power in Arlington, down from 58,878 customers just after noon. Though Dominion was not providing estimates of when power will be restored, county officials said it could be a while.

“It appears that it may be a number of days before power is fully restored,” the county told reporters. As a result of the power outages, Arlington has closed all three of its publicly-accessible pools. Some 80 traffic signals were dark as of this morning; drivers are reminded to treat non-functioning traffic lights as a four-way stop.

The power outages and downed trees are also affecting Metro. While WMATA says most of the Metro system is operating normally, a power outage at Courthouse station has prompted Metro to close the station and set up bus service between Rosslyn and Clarendon. Some Metrobus service has been detoured or delayed by downed trees, including the 7A, 7F, 16A and 16B lines.

Cell phone service was also spotty in parts of the county — including the Courthouse, Clarendon and Columbia Pike areas — and a number of Twitter users were reporting a loss of cable and landline phone service. Arlington County says its non-emergency number (703-558-2222) is experiencing problems, but is still encouraging residents to call 911 only in the event of an emergency.

With another heat advisory in effect today (see below), Arlington has started compiling a list of cooling centers for residents without power. Along the places to take refuge are:

THE NATIONAL WEATHER SERVICE IN BALTIMORE MD/WASHINGTON HAS ISSUED A HEAT ADVISORY… WHICH IS IN EFFECT UNTIL 9 PM EDT THIS EVENING. THE EXCESSIVE HEAT WARNING HAS BEEN CANCELLED.

* TEMPERATURES… IN THE MID TO UPPER 90S.

* IMPACT… RISK OF HEAT EXHAUSTION OR OTHER HEAT-RELATED ILLNESS FOR THOSE WITHOUT AIR-CONDITIONING OR THOSE SPENDING TIME OUTDOORS FOR AN EXTENDED PERIOD.

A HEAT ADVISORY MEANS THAT A PERIOD OF HOT TEMPERATURES IS EXPECTED. THE COMBINATION OF HOT TEMPERATURES AND HIGH HUMIDITY WILL CREATE A SITUATION IN WHICH HEAT ILLNESSES ARE POSSIBLE. DRINK PLENTY OF FLUIDS… STAY IN AN AIR-CONDITIONED ROOM… STAY OUT OF THE SUN… AND CHECK IN ON RELATIVES AND NEIGHBORS.

TAKE EXTRA PRECAUTIONS IF YOU WORK OR SPEND TIME OUTSIDE. WHEN POSSIBLE… RESCHEDULE STRENUOUS ACTIVITIES TO EARLY MORNING OR EVENING. KNOW THE SIGNS AND SYMPTOMS OF HEAT EXHAUSTION AND HEAT STROKE. WEAR LIGHTWEIGHT AND LOOSE-FITTING CLOTHING WHEN POSSIBLE AND DRINK PLENTY OF WATER.

TO REDUCE RISK DURING OUTDOOR WORK… THE OCCUPATIONAL SAFETY AND HEALTH ADMINISTRATION RECOMMENDS SCHEDULING FREQUENT REST BREAKS IN SHADED OR AIR-CONDITIONED ENVIRONMENTS. ANYONE OVERCOME BY HEAT SHOULD BE MOVED TO A COOL AND SHADED LOCATION. HEAT STROKE IS AN EMERGENCY – CALL 9 1 1.

According to the Capital Weather Gang, another line of severe storms is possible later today.

Virginia Gov. Bob McDonnell has declared a State of Emergency for the state. According to the governor’s office, 2.5 million people are without power throughout Virginia — the largest non-hurricane power outage in Virginia history. The governor’s office also confirmed six fatalities as a result of falling trees during the storm.