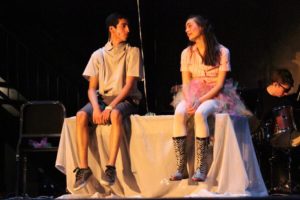 A number of Arlington residents are among the members of the 131 performing arts groups involved in the Capital Fringe Festival, which starts on Thursday, July 12.

‘R.U.X. (Rockwell’s Universal seXbots)‘ debuted last year during a fundraising event at the Ballston Mall. It tells the story of a man’s desire to revamp his father’s company with a new business plan — selling sex robots. The playwright, Maurice Martin, is a 20-year resident of Arlington. The show, which is not recommended for children, premieres at Fringe on Friday, July 13.

The director of ‘Never Mind the Bollocks, Here’s a Midsummer Night’s Dream,’ along with most of the cast and crew, hails from Arlington. The show is a punk rock interpretation of a Shakespeare classic. It begins on Friday, July 13, and is recommended for ages 13 and up.

‘The Hair Chronicles‘ debuts on Saturday, July 14. The three playwrights — Nileah Bell, Mary Nyingi and Michelle Whittaker — live in Arlington and used Marymount University as the setting. The performance focuses on three women searching for graduate paper topics, who discover they share issues with their hair. The show is recommended for ages 13 and up.

Another group of local performers is made up entirely of teens. ‘Mindset’ premiered in March, and was created by students at H-B Woodlawn. It’s described as a “surrealist rock opera,” and is recommended for ages 13 and up. The 35 cast and crew members in Mindset begin their Fringe run on Saturday, July 14.

All of the shows in the Capital Fringe Festival are original works created and produced by the artists, and are performed at 15 different venues throughout D.C. The festival runs through July 29, and a full list of performances can be found online. Tickets, which are all $17, plus a one time charge for a $5 Fringe button, are also available online.