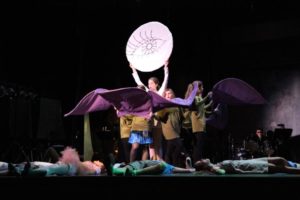 ‘Mindset’ is a show “about an artist’s inner battle against the fear of failure.” Fusing dance, voice, live music and narrative, Mindset casts its starring actors as adults who look back with regret at their choice to pursue conventional careers instead of artistic endeavors.

The show was entirely student-created, with almost no supervision or instruction from teachers. It was written, stage directed, music directed, composed, choreographed and arranged by Jace Casey, an H-B Woodlawn junior. Casey teamed up with creative partner and fellow junior Cassandra Kendall, who was credited as an assistant director, choreographer, lighting designer and technical designer. The creative duo also acted in the show itself. 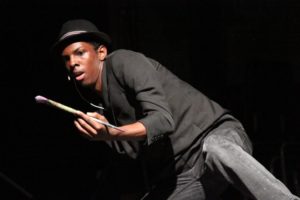 Casey and Kendall recruited a cast and crew of some 35 students, including actors, dancers, singers and musicians. In an interview after the show, one cast member described the group as “the weirdest, rag tag bunch… a gumbo.” That description matches the avant garde nature of the show

“Stylistically, Mindset doesn’t fit the typical mold of most high school productions since it draws influence from performance art, musical theatre, and live concert,” Casey said in an email. “The performance is structured around dialogue but is interwoven with dance and live music from popular culture.”

Proceeds from the show are being donated to the Northern Virginia AIDS Ministry. Additional performances will take place tonight and tomorrow (Saturday), starting at 7:30 p.m. H-B Woodlawn is located at 4100 N. Vacation Lane.