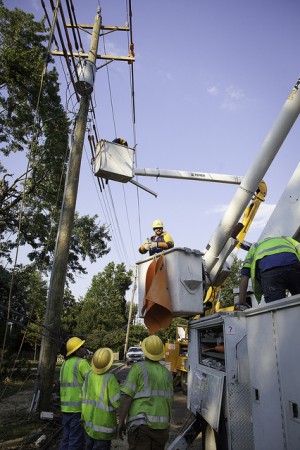 (Updated at 12:40 p.m.) The good news about power outages in Arlington is that all of those stemming from the June 29 storm have been fixed. The bad news is crews had to deal with some new outages this morning, brought on by the storms that passed through Sunday night.

The Dominion outage website showed around 100 customers without power as of 8:00 a.m., but those now appear to have been fixed.

Verizon, meanwhile, reports significant progress on restoring service to its TV, internet and phone customers who were affected by the June 29 storm. A Verizon spokesman said technicians worked extended shifts over the weekend and service levels are nearly back to a normal level today.

Crews are now working to restore service to “several hundred customers in areas technicians could not previously reach due to downed power lines,” according to Verizon.

“I’m extremely proud of our team, which has worked 12 hours-plus daily in temperatures exceeding 100 degrees to bring service back for our customers,” said Chris Childs, Verizon’s Potomac region president of consumer and mass-business markets. “I’m extremely grateful to our customers, who have been overwhelmingly gracious, patient and understanding throughout this process. We will keep going until we’ve fully restored service for all those affected by this harsh weather.”

As of this morning, Verizon field crews were responding to a total of 163 downed utility poles and 602 downed copper or fiber cables throughout the D.C. region. Damage assessments are still underway following Sunday’s storms; there’s no word on exactly how many customers were affected.