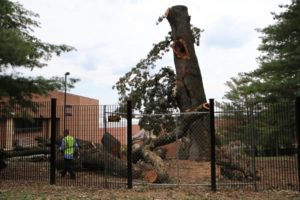 Arlington County has revealed that another historic tree was severely damaged in the June 29 derecho storm.

During the storm, a large limb was ripped off the George Washington Tree, a Southern Red Oak at the corner of S. Fern and 31st Streets, on the grounds of the Arlington Water Pollution Control Plant. The tree, which legend holds might have once been surveyed by George Washington, is designated by the Arlington County Board as a “Heritage Tree.”

Whereas Arlington’s historic Post Oak was totally removed earlier this week due to storm damage, the George Washington Tree is expected to survive — but it’s being severely cut back. Once a stately 130 feet tall, the tree has now been trimmed down to 30 feet.

A county worker was seen working on the tree today, using a chainsaw to break the large branches already cut from the tree into smaller pieces.

The county issued a press release below regarding the tree last night (published after the jump).

A tree that popular folklore holds may have been surveyed by George Washington is the latest victim of the June 29 Derecho storm, Arlington County Parks and Recreation arborists confirmed Wednesday.

The Southern Red Oak (Quercus falcata), affectionately called “The George Washington Tree,” is 19 feet 7 inches in circumference (it would take five adults joining hands to give it a proper hug). The tree stands on the grounds of Arlington County Water Pollution Control Plant. The June 29 storm ripped a large limb off the tree, exposing a hole big enough for a small person to climb through. Because of the damage, and the tree’s poor health, County arborists have determined that it must be severely cut back for safety purposes.

“We are saddened that two magnificent trees – the Post Oak in Westover and now, our George Washington Tree – were no match for the Derecho that caused so much damage to County trees,” said Parks Director Caroline Temmermand.

In 2003, citing the tree’s unusual and lengthy history, the County Board designated the George Washington Tree a Heritage Tree, which is a designation given by the County Board for a tree of notable historic or cultural interest.

“The George Washington Tree” gets its name from the notion that the tree was surveyed by the Father of Our Nation. George Washington was indeed a surveyor, working in the area, at the time that the Summer Hill Plantation Property would have been surveyed. The Pearson deed, however, mentioned a chestnut oak delineating a corner of the property.  The fact that the surveyed tree was a chestnut oak brings the facts about this particular tree into question.

Although the tree’s exact age is not known, it is of great age and gives the community a historical perspective. For years, it has served as a majestic reminder of a time when trees were considered sentinels upon the landscape.

The George Washington tree has been in decline for years. Although decades ago, a large hollow at its base was filled with concrete in an effort to keep the tree strong (a practice since found to be ineffective and no longer used), the tree stood 130 feet tall, with a circumference of almost 18 feet in 2003. By 2007, storms had battered the tree to a height of about 80 feet. In 2011, it lost a large limb, and was further weakened.

The June 29 storm exposed more hollow limbs and more of the hollow trunk. County arborists, and a consulting arborist, have determined that the tree will have to be reduced to a height of about 30 feet. Only a standing trunk, with a few small branches, will remain. The tree will, however, still provide excellent habitat for wildlife and maintain our connection to Arlington’s historic past.

For information on the County’s Notable Trees program, visit the County website.