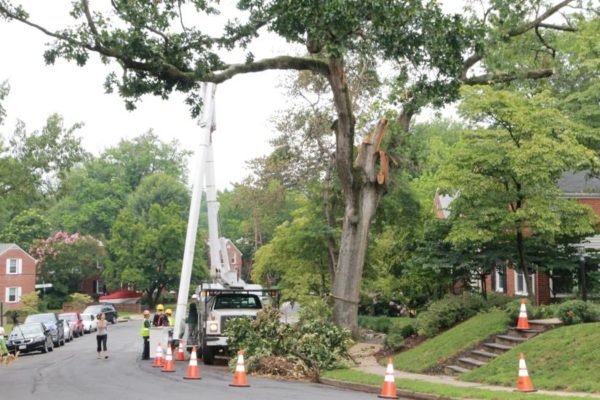 An oak tree that has, for centuries, towered over what is now the Westover neighborhood is being cut down today.

The derecho on June 29 irreparably damaged the historic Post Oak, a majestic 93-foot tall tree that likely dates back to the mid-to-late 1700s. The county decided that the tree, believed to be the oldest in Arlington, had to be removed for the safety of residents.

“What’s remaining is really only about a third of the tree. It had several large trunks coming out of the main trunk, and two of those were broken off,” said Jamie Bartalon with the Arlington County Department of Parks and Recreation. “As a result, the remaining trunk has quite a bit of decay and the tree is no longer balanced. It could potentially fall.” 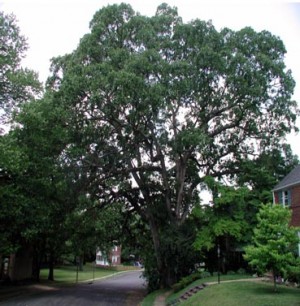 Contractors are spending the day cutting down the tree — on the 5800 block of 11th Street N. — in sections. Parts of it will be salvaged instead of being used for mulch. The county is still trying to figure out exactly what to do with the saved portions.

Although the tree’s exact age is unclear, it’s believed to have been around since the 1700s. That would make it not only the oldest tree in Arlington, but also perhaps one of the oldest in the state. Rings will be counted from salvaged sections of the 18-inch circumference trunk to determine exactly how old the tree was.

The Post Oak was designated as a protected “Specimen Tree” by the County Board in 2008.

Bartalon said part of what made it noteworthy besides the age was its height, considering those types of trees are slow growing and typically don’t exceed 50 feet.

The tree should be removed down to the stump by this evening.