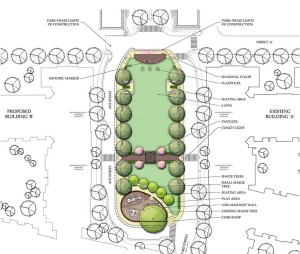 The new Henry Wright Park will soon open in the Buckingham neighborhood, now that the County Board has authorized a resubdivision plan and maintenance agreement.

The county has been working with Paradigm Development Company to develop the 2.3 acre public park. The property is known as Buckingham Commons Village I, and a portion purchased by the county for $14.8 million in 2009 will be dedicated as Henry Wright Park (4350 4th Street North), as well as a new county street.

Paradigm Development Company will be responsible for ongoing maintenance at the park, as part of the public/private partnership. The county will maintain the new portions of North 4th Street and North Upton Street once they are dedicated. The measures were finalized by the County Board’s unanimous vote at its meeting on Saturday (July 21).

“Henry Wright Park brings much needed open space to Buckingham Commons Village I,” said Arlington County Board Chair Mary Hynes. “Through a public/private partnership with Paradigm, the county has found a cost effective way to ensure that this beautiful park is well taken care of so that generations of Arlington children have a safe, attractive place to come together, exercise and play.”

The oval park has a fenced in playground for two to 12-year-olds, picnic and game tables, two grassy areas and a sign commemorating the history of the Buckingham Villages Gardens Apartments.

Construction began last fall and is nearly complete. If all goes according to plan, the park will open next month.