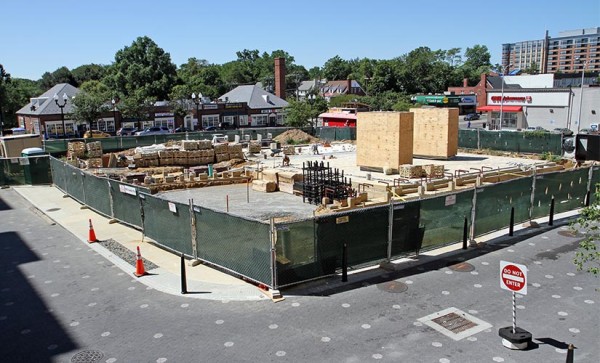 The new public plaza at the Penrose Square development along Columbia Pike is still expected to open this fall, despite a recent setback.

The contractor working on the $2 million project found and accidentally ruptured an oil tank earlier this month during excavation work, we’re told. The rupture contaminated part of the site, but the county and contractors worked quickly to remedy the situation.

According to Arlington County Department of Parks and Recreation spokeswoman Susan Kalish:

The tank’s presence was previously unknown by the County. [Arlington] County’s construction manager immediately stopped contractor from working and notified our 3rd party consultant. Samples were taken and the fire marshal and Virginia Department of Environmental Quality (VADEQ) were notified. VADEQ directed County to have the tanks removed by a licensed contractor in the presence of the fire marshal. Samples were also taken to determine the extent of the contamination. Remediation steps have been approved by VADEQ.

Kalish said the plaza is still on track to open this fall.

The plaza will consist of “a tree-covered, upper terrace with movable tables and chairs; an inner plaza with a water feature; a unique two-piece sculpture called ‘Echo’; an inscription of the historic significance of the site, and a grass mound area shaded with trees for informal seating,” according to the county.