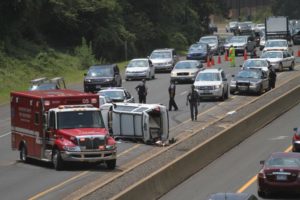 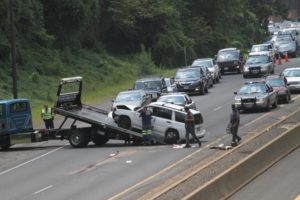 (Updated at 2:05 p.m.) An SUV overturned on eastbound I-66 between Glebe Road and Quincy Street this afternoon.

The accident happened just after 1:00 p.m. Initial reports suggest the driver of the overturned vehicle got spooked by a merging vehicle and swerved into the median. The SUV then flipped on its side.

A second vehicle that was reported to have been involved in the wreck didn’t stay on scene, but stopped further down I-66, according to scanner traffic.

Only one lane of EB I-66 is getting by the wreck at this time. No word yet on any injuries, but an ambulance was called to the scene.