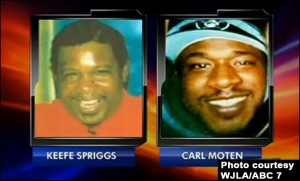 (Updated at 8:55 p.m.) Arlington County Police confirmed today that they’re investigating the deaths of two men in a Hall’s Hill apartment as a double homicide.

Initially classified as “suspicious deaths” yesterday, police now say that they believe Arlington resident Keefe Spriggs, 59, and Carl Moten, 31, were murdered inside the apartment on the 1900 block of N. Culpeper Street.

No weapon was found inside the apartment, according to Arlington County Police spokesman Dustin Sternbeck. Still, police are not saying whether a killer is on the loose. Instead, Sternbeck says the crime was an “isolated incident” and that local residents should not be worried about further violence.

Spriggs was a divorced father of two who worked in a body shop, WJLA’s Jennifer Donelan reported Wednesday evening. Moten, a cook at a restaurant in Falls Church, was an acquaintance of Spriggs and was staying at his apartment.

Both Spriggs and Moten had criminal records in Arlington, including DWI and eluding police for Spriggs, assault and probation violation for Moten, and possession of cocaine for both. Spriggs’ crimes dated back to 2003, however, and Sternbeck said so far there’s no indication of any other crime taking place inside the apartment other than the two killings.

After going more than two years without a homicide, these murders are the third and fourth homicide in Arlington so far this summer.