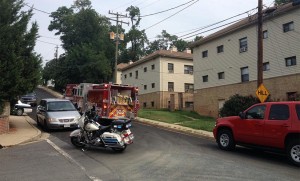 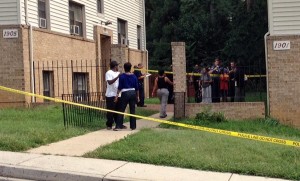 Update on 8/8/12 — ACPD has confirmed that they’re investigating the deaths as a double homicide.

(Updated at 2:55 p.m.) Police are investigating another possible homicide, this time in the Hall’s Hill/High View Park neighborhood.

A maintenance worker found two men dead in the living room of an apartment on the 1900 block of N. Culpeper Street, after a family member had called because they hadn’t seen the resident for awhile, according to Arlington County Police spokesman Dustin Sternbeck. A television was on in the apartment and blood could be seen, but no weapon was found, Sternbeck said.

Detectives are investigating the incident as a possible homicide or double homicide, though so far police are only officially saying the deaths are “suspicious.” The deceased men have been identified by police as Keefe Spriggs, 59, of Arlington, and Carl Moten, 31, of no fixed address.

The men are acquaintances and the apartment belongs to Spriggs, Sternbeck said. Asked whether a killer is still on the loose, Sternbeck was vague.

“We do believe it’s an isolated incident,” he said. “We are very early in this investigation. The detectives that are working the case will be processing the scene, interviewing all the neighbors [and] last known contacts of these individuals.”

Several people, including a woman believed to be Spriggs’ sister, have already been interviewed by detectives on the scene.

This could be the third homicide in Arlington in as many weeks. On July 24, a woman was killed in a murder-suicide near Fairlington. On July 27, a jewelry store owner was killed during an armed robbery on Columbia Pike. A 53-year-old D.C. man was charged with murder last week for the latter crime.

Prior to July, there had not been a homicide in Arlington since March 14, 2010.