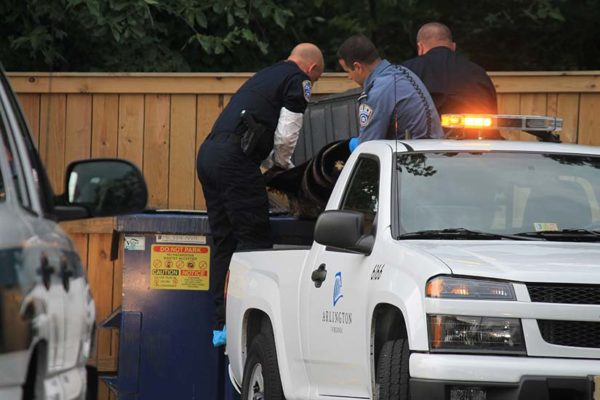 (Updated at 6:35 p.m.) Police are investigating what appears to be a murder-suicide at the Park Shirlington Apartments on the 4500 block of 31st Street South, near the Fairlington neighborhood.

Arlington County Police spokesman Dustin Sternbeck says it appears the man and woman, both 30-years-old, had some sort of relationship and lived together in the apartment where they were found. An adult female family member who also lived in the apartment found the bodies in a back bedroom and called 911 around 2:45 p.m.

One resident told ARLnow.com that the apartment was home to a couple with two children and a woman who also had a child. The children were all between the age of 7 and 9, she said.

“Nothing like this has happened here before,” said Cecilia Rodriguez. “I’ve lived here for 26 years and I’ve raised my kids here… It’s scary for me.”

Rodriguez said she believes a car police towed from the apartment’s parking lot belonged to the female half of the couple.

Police were seen taking items out of a dumpster near the apartment building, such as a rolled up rug and bags of trash. Initial reports suggests evidence might have been found in the dumpster.

The last homicide in Arlington County occurred on March 14, 2010, when a man was stabbed to death in the Lyon Park neighborhood.