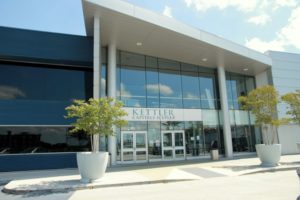 What do cops, consultants, hockey coaches, radio personalities and current and former Washington Capitals players have in common? They’re all expected to help raise money and awareness for blood donation at Kettler Capitals Iceplex (627 North Glebe Road) next month.

Under the slogan of “Give Blood, Play Hockey,” Inova Blood Donor Services is holding its fourth annual Charity Hockey Classic fundraiser at the ice rink in Ballston on Sept. 9. Tickets for the event are available online.

More information about the fundraiser, from a press release:

Inova Blood Donor Services is asking the local community to “give blood, play hockey” as they host their fourth annual fundraising event, the Charity Hockey Classic, which will — for the first time — feature members of the Washington Capitals Alumni facing off against three local teams, including two-time defending champion Virginia Coaching Cardinals on Sunday, September 9, from 10 a.m. to 1 p.m. at the Kettler Capitals Iceplex.

Admission to see the Capitals Alumni compete in this round-robin tournament against the Booz Allen Minutemen, Northern Virginia Law Enforcers and Coaching Cardinals is $10 per person and FREE for kids. All fans are encouraged to wear their hockey jerseys.

“The fourth Charity Hockey Classic promises to be another spirited day of competition and charitable giving by the local hockey community,” said Charity Hockey Classic Chairman Adam Bartholomew. “We are thrilled and grateful to welcome the Washington Capitals Alumni program for the first time and appreciate the support of our two returning squads along with the Northern Virginia Law Enforcers for their support of our mission to provide a safe and adequate blood supply to the entire DC metro area.”

The Capitals alumni team, which will also include some front office staffers, is in the process of assembling with a final team roster anticipated later this month. Current Washington Capitals teammates Matt Hendricks and Jeff Schultz have offered their support in the past serving as honorary captains.

The Cardinals, a ‘flock’ of youth hockey coaches from across Northern Virginia, blanked the Booz Allen Minutemen (Booz Allen Hamilton’s corporate hockey team) in last year’s contest by a score of 5-0, and look to defend their title, securing a three-peat in 2012. The Cardinals roster consists of coaches from local youth hockey programs including the Ashburn Xtreme, Reston Raiders, NoVA Ice Dogs, and Washington Little Caps. The Booz Allen Minutemen features employees from across the region while local officers and patrolmen will comprise the hard-charging Northern Virginia Law Enforcers. Each squad will face one another in a 15-minute mini-game.

The beneficiary of the Charity Hockey Classic is Inova Blood Donor Services, a service line to the not-for-profit Inova Health System that collects, tests and provides blood and blood products each day to 15 hospitals and medical centers throughout the Washington, D.C. metro area. In 2011, the event raised over $65,000 – up from $40,000 in 2010 (an increase of over 60%) and pushing the three-year total to just over $146,000 The goal for 2012 has been set to raise $90,000, which is needed to refurbish one of Inova’s older bloodmobiles.

Kettler Capitals Iceplex (home of the Washington Capitals) will host the event from 10 a.m. to 1 p.m. at its location atop Ballston Common Mall. Other attractions and game entertainment include a silent auction, local celebrity appearances by radio personalities, Mike O’Meara, Oscar Santana, Buzz Burbank and Robb Spewak from The Mike O’Meara Show, Capital’s mascot Slapshot and spirit team, the Red Rockers. And be sure to catch the intermission games with mini-mites youth hockey and the popular chuck-a-duck promotion.

Inova Blood Donor Services, a 501(c)(3) organization headquartered in Sterling, VA, also maintains its strong ties to the hockey community as the Official Blood Collection Agency of the Washington Capitals in addition to partnerships with the Washington Nationals and George Mason University.