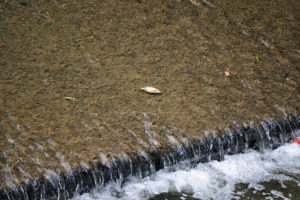 Update at 4:40 p.m. — Chlorinated water leaking from a water main near Shirlington has seeped into Four Mile Run and killed “dozens” of fish, an Arlington County official told ARLnow.com this afternoon.

We first reported the leak near 2400 S. Walter Reed Drive this morning, after Claremont and Fairlington residents reported widespread low water pressure in the area. Now we’re told that the leak — in a 12-inch pipe — has resulted in a significant fish kill.

Residents may notice dead fish in portions of Four Mile Run downstream of the break due to the chlorinated water being released. This water is not harmful to humans or pets, but unfortunately resulted in a fish kill. Residents should follow the County’s normal precautions for safe use of urban streams.

McDaniel said repairs on the water main are expected to continue into tomorrow. Residents may continue to experience low water pressure but “no one is expected to be without water,” she said.