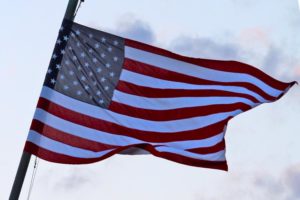 Starting tomorrow, Aug. 18, Arlington will be hosting a month-long series of naturalization ceremonies for some 3,100 new U.S. citizens.

Seven ceremonies, from Aug. 18 to Sept. 15, will be held at Kenmore Middle School (200 S. Carlin Springs Road). One will be held on Aug. 31 will be held at George Mason University’s campus in Virginia Square. In all, about 3,100 new citizens from Virginia and the District of Columbia are expected to participate in the ceremonies, we’re told.

U.S. Citizenship and Immigration Services had been holding smaller ceremonies at its field office in Fairfax but, according to spokesman Daniel Cosgrove, the agency has since decided to hold larger, less frequent ceremonies and thus selected the venues in Arlington, which can accommodate the larger events. The ceremony tomorrow at Kenmore is expected to include 400 immigrants, along with several hundred friends and family members.

Cosgrove said the events are not the “special ceremonies” which attract TV cameras and reporters on days like the Fourth of July, but they’re still open to the public.

“It’s always good to get out into the community, show people what we do and give them a chance to see this process,” he said. “It gives people an appreciation for just what a special country this is.”

Also present at the ceremonies will be several dozen volunteers from the League of Women Voters (LWV) of Arlington, who will be conducting non-partisan, on-site voter registration drives.

The voter registration effort will “make sure that all new citizens will be able to exercise their franchise,” said local LWV Voter Service co-chair Kristin Goss, who added that the League as been trying for more than a year to bring the naturalization ceremonies to Arlington.