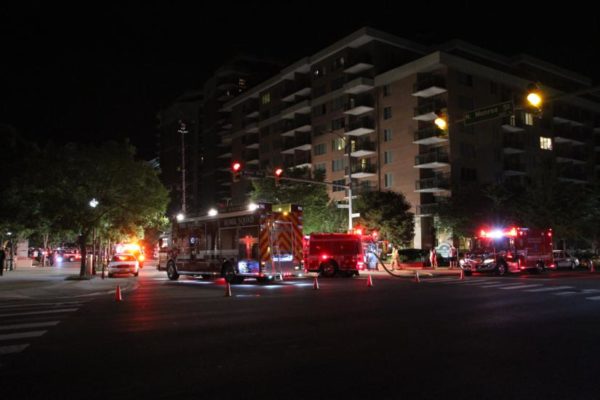 Update on 8/28/12 at 1:00 p.m. — Police confirm they have arrested two men in connection with the suspected meth lab.

Update at 1:05 a.m. — Residents of the second and fourth floors are being allowed back in the building. The bomb squad is packing up its gear, but police and the hazmat teams are remaining on the scene, according to Fire Department spokesman Capt. Gregg Karl.

An apartment building just a block away from the Virginia Square Metro station has been partially evacuated as police and firefighters investigate a possible meth lab discovered in an apartment.

The area around the Virginia Square Apartments, a 225-unit high rise at 801 N. Monroe Street, has been cordoned off by authorities. Police, firefighters, the bomb squad and a hazmat team are all on the scene, and a decontamination area has been set up. Numerous evacuated residents have gathered outside the Metro station.

So far police are not officially confirming that they’re investigating a meth lab, only officially confirming that they found a “hazmat situation” while responding to a domestic incident on the third floor of the building. Police and the fire department chose to evacuate the second, third and fourth floors of the building, according to Arlington County Police spokesman Lt. Michael Watson.

The homemade production of methamphetamine is dangerous and meth lab explosions happen on a regular basis across the country.