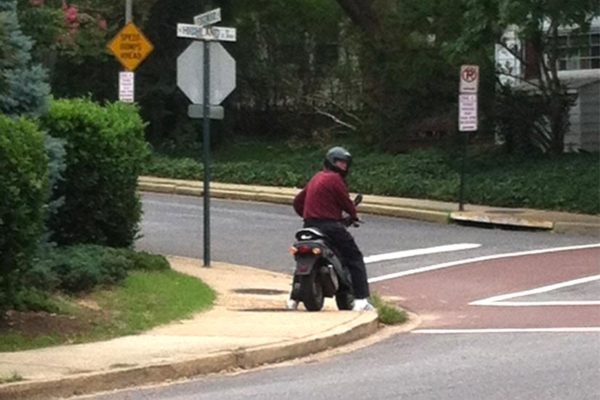 A tipster says a man on a scooter has been attempting to scam Arlington residents.

The woman, who didn’t want her named used for this article, said the man (pictured, above) pulls off to the side of the road, pretends to be out of gas, and asks passersby for money. She said she informed police about the possible scammer, but wanted other local residents to be aware of him as well.

On Saturday, a friend told me that she saw a man on a scooter who was panicked and asking for gas money. This was in Rosslyn near Ft. Myer. She said he seemed legit, was middle-aged, and refused to use her phone when she offered. She ended up giving him cash. Half an hour ago, I was walking on Highland St. in Lyon Village and saw a man on a scooter pull up on the sidewalk, putz around with the mechanical parts (it sounded like it was sputtering), and then ask the next young woman who walked by for cash because he was out of gas. It appeared to be the same man. He is about 5’10”, white, reddish-blonde hair, middle-aged, and was wearing a maroon shirt, black pants, and white Adidas shoes. He was on a silver scooter. Just wanted to give a heads up… that this guy is a scammer (especially because he appears to be approaching young women in particular). Don’t fall for it.