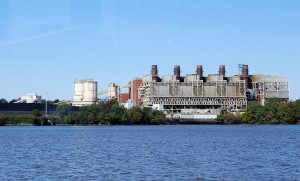 (Updated at 4:15 p.m.) The closure of a power plant in Alexandria may help improve air quality in Arlington.

The GenOn Potomac River Generating Station, a 63-year-old coal-fired power plant on the Potomac River, north of Old Town Alexandria, permanently shut down this week. The plant closed after dogged efforts by local residents and environmental activists, who argued the 482-megawatt plant was harming local air quality and endangering residents.

The Washington Post called the plant the “largest single source of air pollution in the Washington region.” The plant’s smokestacks emitted fine particulate matter and sulfur dioxide, occasionally at levels that could temporarily harm sensitive individuals, according to a recent air quality study.

Jeff Harn, the Bureau Chief of Arlington’s Office of Sustainability and Environmental Management, said the plant’s closure is a positive development for local air quality.

“I think generally it’s a good thing,” he told ARLnow.com. “We sort of look at that plant as a regional source of air pollution. It affects the whole region. [The closure] would be beneficial, I’m sure.”

At a press conference on Monday, Rep. Jim Moran (D-Va.) said the closing of the plant will benefit the health of local residents.

“Today marks the conclusion of a long fought but well won victory for Northern Virginia residents and the health of citizens in the National Capital Region,” he said. “What once was the largest stationary source of air pollution in the metro area will be no more. With the extinction of this dinosaur, our air will be cleaner. As much as 600,000 fewer tons of carbon dioxide, 1.9 million lbs of nitrogen oxide, and 325,000 lbs of sulfur dioxide will be in the air we breathe.”

Harn said the areas closest to the plant — parts of Alexandria, as well as parts of South Arlington and Crystal City — should see some air quality improvement as a result of the plant’s closure. D.C. should also benefit, he said, as prevailing winds often carried the plant’s emissions across the Potomac and into the District.

Since there is not much heavy industry in the area, Harn says most of the air pollution in the D.C. area is transportation-related — from sources like cars, buses and airplanes.