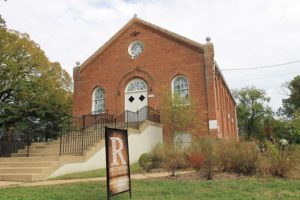 Restoration Anglican Church (1815 N. Quincy Street) hasn’t been in existence for long, but it’s already looking to expand into a larger building.

The church congregation formed in January 2009, when it was around 100 people. At that time, it rented space for one service per week from Trinity Baptist Church, as did a third congregation which ended up relocating to Reston. Restoration bought the church building when Trinity disbanded in 2010.

Now, the congregation is closer to 450-500 people and the number of weekend services has increased to three. The Rev. David Hanke says the congregation has reached its threshold for expansion in the current facility.

“Our ability to keep adding services has hit its end so we need to build something larger,” he said.

Last month, Restoration began its capital campaign in an effort to raise a portion of the $4.5 million budgeted for the project. Although a design has not yet been finalized, the goal is to build a facility that would seat around 400 people, instead of the current 150 person capacity.

The existing church building will be razed and the new facility will be built on the same plot of land. So far there is no hard date for breaking ground, considering a final design hasn’t even been approved yet, but the hope is to start construction in early 2013.

While construction takes place for an estimated 12 to 18 months, the congregation will use space at Little Falls Presbyterian Church for one service per weekend.

Rev. Hanke reports having a good relationship with the surrounding community, and mentioned attending a Cherrydale Citizens Association meeting to address any concerns about a larger church. One of the issues that has come up as a concern among some residents is the lack of parking.

Right now, there are only 13 parking spaces at the church but there is a shuttle on Sundays that runs to the designated parking lot adjacent to Washington-Lee High School near I-66. The parking plan is in compliance with a county code allowing churches to run such shuttles to nearby parking lots. Rev. Hanke says the new church will house the same number of spots and the Sunday shuttle service will continue. Church goers will be reminded, as they are now, to appease neighbors by not parking on Quincy Street or nearby side streets.

Although a finished church facility is far in the future, the congregation is looking forward to its larger, permanent home.

“In the ongoing conversation we’re having with our community, one of the parallels I’ve drawn is to being a homeowner. There’s a big difference between renting a space and owning a space,” said Rev. Hanke. “Since we became owners, we became much more invested in the Quincy Street area. We love being on that street and we love our neighborhood. We are excited we have the opportunity to be there for a long, long time.”