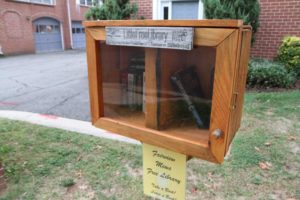 Arlington has a new library, but you might not even notice it if you drive by.

A new “Little Free Library” was recently installed on S. Edgewood Street, near Army Navy Country Club. The “library” is actually just an old crate — still labeled “Wisconsin cranberries” — with a glass door on the front, mounted on a stake in front of the Fairview Mews townhouses.

Inside the crate are a number of books, mostly popular fiction from the likes of James Patterson, David Baldacci and Clive Cussler. In addition to popular novels, the library has previously stocked children’s books, a baseball history book, and a book of poetry.

Users of the library are encouraged to take a book while leaving one in its place, but it’s all on the honor system: no key or library card is required.

The library was the idea of Robert Walter, a Fairview Mews resident who works at American University.

Walter says he and the Fairview Mews Homeowner’s Association decided to create the library for the neighborhood — about 150 homes located off of Glebe Road and Walter Reed Drive, south of Columbia Pike — after reading an article about the Little Free Library movement on Facebook. The idea of encouraging reading while bringing neighbors together was inspiring, he said.

“[We did this] to promote a sense of community and to promote a love of reading,” Walter said. “I just thought that was a great idea, waiting for a place to go. It’s to meet our neighbors and talk and ultimately look out for each other, as well as to brighten someone’s day with a new book to share.”

So far, Walter says the idea has been a modest hit. About 30 books have been removed and replaced since the library was first installed in August, he said.

More than 2,000 Little Free Libraries have popped up across the globe since the movement started in 2010. 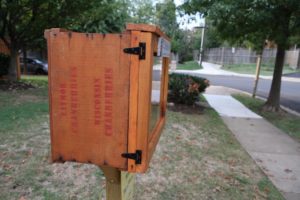 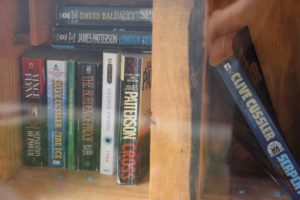