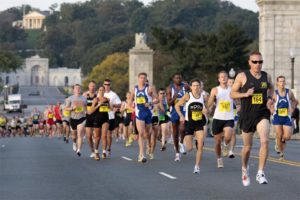 A number of local roads and highways in south Arlington will be closed Sunday morning for the running of the 28th annual Army Ten-Miler race.

The race starts and ends near the Pentagon but the course also takes participants into the District. More than 30,000 runners are expected to participate. Runners and spectators are being encouraged to take Metro to get to the race.

The Arlington County Police Department will close several streets near the Pentagon on Sunday, October 21, 2012, for the 28th Annual Army 10-Miler race. The race begins at 8:00 a.m. on Route 110, crosses the Potomac River into the District of Columbia, returns to the Commonwealth via the I-395 HOV lane and ends in the Pentagon north parking lot.

The following roads in Arlington will be impacted:

All of the roads should be reopened by noon.

In addition, access to the Pentagon north parking lot will be restricted to “Authorized Vehicles Only” from 4:30 a.m. to 2:00 p.m. Parking for Pentagon employees and Pentagon Memorial patrons will be available in the south parking lot via Columbia Pike and S. Fern Street.

Runners, spectators and support personnel are encouraged to use Metro, as parking is limited. The Pentagon and Pentagon City stations on the Blue and Yellow Lines are located within walking distance of the start and finish lines.