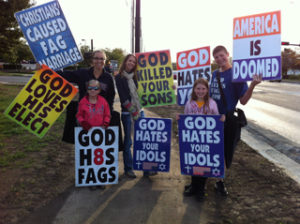 A church group known for stirring up controversy with its extreme messages has scheduled a day of protests in Arlington next month.

According to a picket schedule on its website, the Westboro Baptist Church of Topeka, Kansas, will send members to Arlington on Monday, November 12. They’re slated to protest at Yorktown High School (5200 Yorktown Blvd) starting at 7:40 a.m., the Pentagon starting at 8:50 a.m. and Arlington National Cemetery at 10:00 a.m.

The group has made stops in Arlington before, in part to perform protests of military funerals. Such protests have been fodder for lawsuits around the country, but the group’s right to protest at the funerals was upheld by the Supreme Court last year. The church has also made headlines for its prominent anti-gay message, for lauding the 9/11 attacks and for using controversial slogans such as “Thank God for breast cancer” on picket signs.

Although the church’s protests of the Pentagon and Arlington National Cemetery may not seem surprising, some question why it is targeting Yorktown. The church offered the following explanation on its website:

“Westboro will picket Yorktown High School because we know that Doomed america has turned the school systems into institutions to teach rebellion against God. Every adult that touches the lives of your children hate them, including parents, teachers, coaches, preachers. No truth to be found on the landscape. So you will all land in hell together, and there you will remain, bitter cursing and wailing and gnashing of teeth. How sad is that?! Not to worry, WBC brings HOPE! The Bread of Life. If you loath it, too bad, it is all you get.”

Currently, there have been no reports of plans for increased security or police presence at any of the three sites where protests are scheduled. Arlington County Public Schools Spokesman Frank Bellavia did note, however, that November 12 is Veterans Day, and school is therefore not in session.