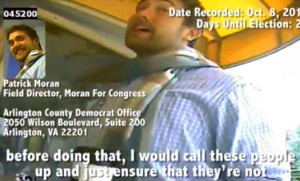 (Updated at 7:25 p.m.) The Arlington County Police Department has opened a criminal investigation into a video of Patrick Moran, son of Rep. Jim Moran (D) and former field director of his reelection campaign.

The video, released yesterday by conservative activist James O’Keefe, allegedly shows Moran offering advice on how to cast fraudulent ballots. The advice was given to an undercover reporter who approached Moran with a scheme to fraudulently vote on behalf of 100 people.

Moran has since resigned from the campaign.

The Arlington County Commonwealth Attorney’s Office and the Arlington County Police Department have been made aware of a video released yesterday allegedly depicting Patrick Moran, former Director of Field Operations for the Jim Moran for Congress campaign organization, assisting another to vote illegally.

The Arlington County Police Department has initiated a criminal investigation of this matter.

“All parties will be involved in the investigation,” he said, adding that “it would be irresponsible” to not investigate the video. Police will turn over the results of the investigation to the Commonwealth Attorney’s Office, which will then decide whether or not to prosecute.

Patrick Moran, in a statement issued following his resignation from the campaign, denied any wrongdoing.

“At no point have I, or will I ever endorse any sort of illegal or unethical behavior, he said. “At no point did I take this person seriously. He struck me as being unstable and joking, and for only that reason did I humor him. In hindsight, I should have immediately walked away, making it clear that there is no place in the electoral process for even the suggestion of illegal behavior: joking or not.”

Arlington GOP Chairman Charles Hokanson, meanwhile, called for Rep. Moran to resign over the video during an interview that was scheduled to air this afternoon NPR, according to an Arlington County Republican Committee press release.

I don’t condone the actions of the right wing organization in question, but I recognize that this incident is teaching Patrick a tough lesson early in life. I know that my son’s intention was to deflect the line of questioning by this trained political operative bent on goading him into a specific response.

But the fact remains that the conversation drifted into discussions that reflected a serious error in judgment that Patrick wishes he could take back.

In life, if we learn from our mistakes, we move forward stronger, wiser, and committed to ensuring they are not repeated. I know Patrick will come out of this tough situation a better man for it.

Our campaign welcomes a thorough investigation and we will fully cooperate. The incident involving Patrick was an unfortunate situation. While clearly lacking good judgment, Patrick’s unsolicited interaction with a right wing political operative seeking to trap him in a damaging conversation did not constitute an unlawful action. We are confident this unwelcome chapter in the campaign will be quickly and favorably closed.