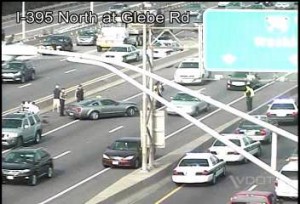 Drivers should expect significant delays on southbound I-395 following an accident in the HOV lanes.

Initial reports suggest the accident involved an off-duty police officer in his or her personal vehicle. The HOV lanes are partially blocked near Glebe Road as a result of the accident. HOV traffic is getting by on the shoulder.

At least one mainline southbound and northbound lane of I-395 is also blocked. Southbound traffic is currently slowing near the Pentagon.