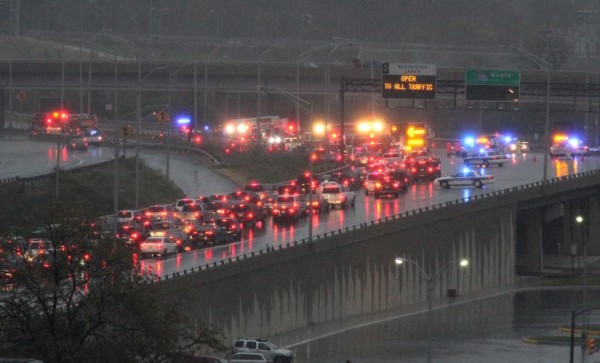 (Update at 8:40 a.m.) Traffic on northbound I-395 is completely blocked following a serious multi-vehicle accident near Crystal City.

Three vehicles are involved, according to Arlington County Police spokesman: a Toyota Corolla, a white van and a box truck. The white van rolled on its side, trapping its two occupants, Sternbeck said. Both have since been extricated from the vehicle and are being transported to a local hospital.

Three ambulances have been requested to the scene for two to three reported injuries. The van was said to be carrying propane tanks, but no hazmat response was required.

I-395 northbound is completely blocked at Route 110. Traffic is being diverted onto the HOV lanes of 395.