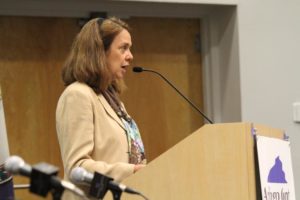 Here is the unedited response from Janet Murphy (IG):

We need to balance the budget and pay off the federal debt. Install an auditable accounting system at the pentagon. Bring the troops and tax dollars home. Cut wasteful military spending of precious taxpayer dollars. These are positive, fiscally responsible Green Party solutions.

We need to invest in green infrastructure. Build rail. Every dollar invested in rail grows business, increases revenue. Promote eco-business in solar and wind for the green economy. Every dollar spent on rail infrastructure creates $28 more dollars of economic benefit.

We need the Potomac Yard Metro rail stop. We need the Cameron Station Virginia Rail Stop. Build the Columbia Pike Rail, and Rail from Alexandria to Arlington. We need rail along I-66. We need a new rail tunnel under the Potomac River. Where rail goes, business and the economy grow. Rail increases the value of our homes, and communities.

This year, my party, the Independent Green Party of Virginia, put the most congressional candidates on the ballot for a single party in Virginia, since 1916! That’s what hard work and positive green action can do! Outside the two larger parties running for Congress are Gail for Rail Parker District 1; Kevin Chisholm District 10, Dr. Ken Hildebrand District 5; Peter Marchetti District 11, Janet Murphy District 8; and Green Party Candidate for President Jill Stein.

We need a full slate of 100 Independent Green Party candidates for House of Delegates in 2013. We need you to be one of them. Together, let’s build the growing Green Economy of tomorrow now!

Like the Redskins have done at their stadium, we need to put solar on the roofs of all our schools, public and private buildings. The time for solar is now! The U.S. Air Force Academy has solar panels. Nellis Air Force base saves $81,000 per month with a huge solar farm. We could put solar panels on every home. Hickam in Hawaii will have solar. Renewable energy will help us keep our air and water clean.

This is what I believe. As an environmentalist I am a strong advocate for humane treatment of animals both wild and domesticated, and I pursue strategies for responsible stewardship of our gifts and resources.

I bring wide experience in business and in the community. My ten years of practice in real estate provided me with an understanding of the essential needs of our community for housing that leads to positive solutions. Ban the death penalty, end the drug war.

We must have Medicare for all. We must fight to protect, preserve, and grow Social Security.

To produce revenue, I agree with many economists on the need to enact a transaction tax on Wall Street, and protect that revenue to balance the budget and pay off the federal debt.

We could cut U.S. military spending by 90% and still be spending more than any other nation on earth!