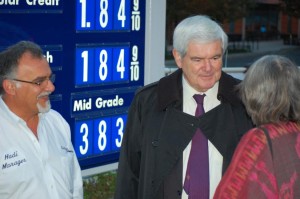 For just over two hours this morning, regular unleaded gasoline was $1.84 per gallon at the Pentagon Liberty gas station at 2300 Columbia Pike.

The cheap gas was organized by the New American Energy Opportunity Foundation, a group that’s in favor of increased domestic energy production in the U.S. and critical of the Obama administration’s energy policies. Among those on hand for the promotion were former Speaker of the House Newt Gingrich (R), who stopped by to lend support, and the “Gas Can Man” a smiling gas can mascot that has been appearing at similar events in Ohio, Virginia and elsewhere.

Organizers say they planned to provide the cheap gas for about 150 motorists between 7:00 and 9:00 this morning. They said drivers started lining up a half hour before the event in order to take advantage of the offer. Some of the drivers, organizers said, asked whether they could still fill up even though they were Obama supporters (yes, they could).

Two Arlington police officers helped direct traffic during the event, preventing drivers on busy Columbia Pike from queuing up for the promotion. Still, traffic on eastbound Columbia Pike was slow as drivers stopped to ask the officers why they weren’t allowed to block the Pike’s right-hand lane in order to wait for one of the pumps to open up.

Signs placed around the station during the event blamed President Obama for higher gas prices.

“No CHANGE to fill my gas tank!” said one.

“Can Obama,” said another.

The $1.84 per gallon price of gas reflects the price just before President Obama’s inauguration in 2009, in the midst of the country’s economic crisis. Organizers said the president’s energy policies have led to an increase in gas prices since he took office.

The price of gas at the Citgo station down the street from the event today was $3.55 per gallon. By comparison, in June 2008 under President George W. Bush, the average price of gas in the U.S. was $4.10 for a gallon of regular unleaded.

Photos by ARLnow.com and courtesy of Scot Crockett, as labeled