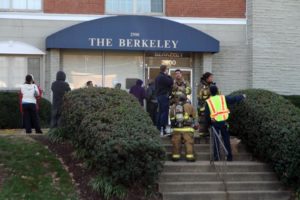 The fire broke out around 6:00 p.m. at the Berkeley Apartments, on the 2900 block of S. Glebe Road. The flames and resulting damage were confined to one basement apartment, according to ACFD spokesman Capt. Gregg Karl.

One person was taken to a local hospital for medical reasons unrelated to the fire, Karl said. With the exception of the occupant(s) of the damaged apartment, no residents were displaced by the blaze.

The Berkeley apartment building was the scene of a fire last December.