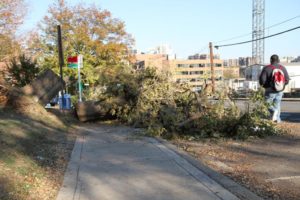 The tree supposedly came down this past Sunday, according to parks department spokeswoman Susan Kalish, but the resident who first emailed ARLnow.com to ask about the safety hazard said it actually came down Tuesday, during Superstorm Sandy. Regardless of when it fell, the tree remains have been blocking the sidewalk ever since, forcing pedestrians to either walk up a small hill or into the street to get around it. It also blocked a bus stop and a bike lane, forcing bicyclists out into a vehicle travel lane.

The tree was on private property — near the intersection of Wilson Blvd and N. Troy Street, just down the street from the Courthouse area — and Kalish said the county was not notified that it was blocking a sidewalk until ARLnow.com asked about it yesterday.

“According to a property manager at Colonial Village the tree fell Sunday night. They did not have an opportunity to remove it or contact us regarding it until we checked into it for [ARLnow.com],” she said. “The Parks team will clear the sidewalk today.” 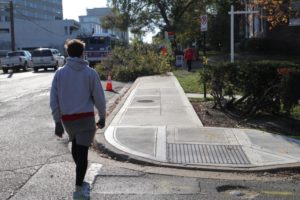 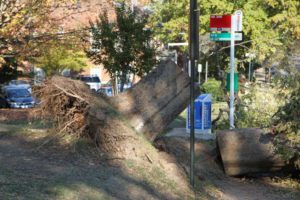